Experts predict what the 2020 housing market will bring 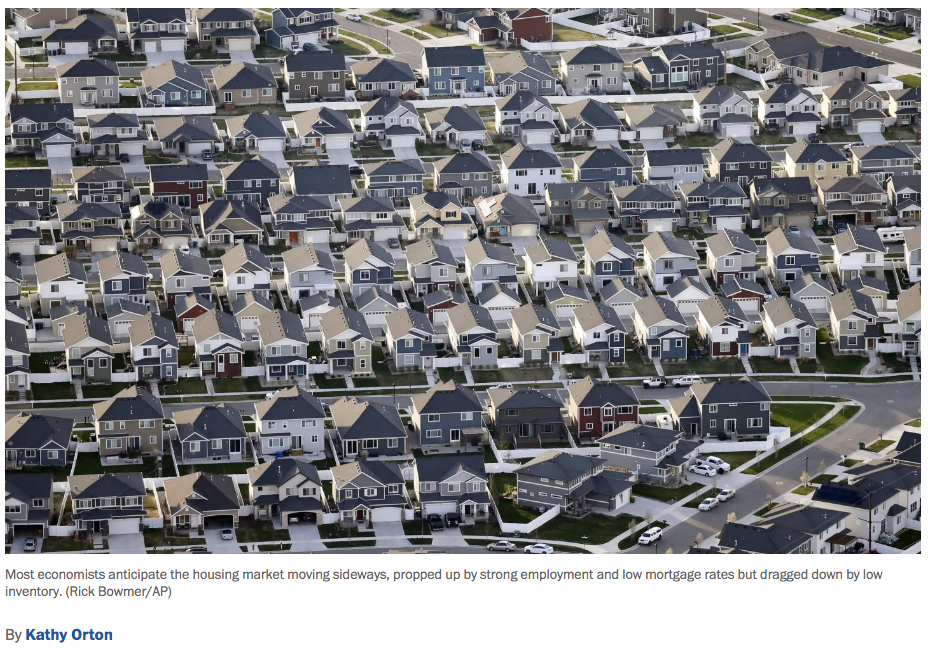 A strong job market and low mortgage rates should sustain the housing market in 2020. The problem will be finding enough homes for buyers.

With unemployment hovering at a 50-year low and interest rates well below historical norms, the real estate industry is being dragged down by scarcity in housing stock, especially at lower price ranges. Not enough homes are being built, and homeowners are staying put longer, creating a bottleneck.

Still, the market is on better footing than it was a year ago, when economic uncertainty caused by global trade tensions, stock market volatility and a partial government shutdown, along with rising mortgage rates and home prices, put a damper on sales. Mortgage rates, which seemed poised to surpass 5 percent, a level they hadn’t reached since 2011, retreated in 2019. The average rate of the most popular mortgage, the 30-year fixed, has remained below 4 percent for the past 32 weeks, according to Freddie Mac data. At the start of 2000, it was 8.5 percent.

In their forecasts for 2020, most real estate experts anticipate the housing market moving sideways rather than up or down.

“Housing appears poised to take a leading role in real GDP growth over the forecast horizon for the first time in years, further bolstering our modest-but-solid growth forecasts through 2021,” said Doug Duncan, Fannie Mae’s chief economist. “In our view, residential fixed investment is likely to benefit from ongoing strength in the labor markets and consumer spending, in addition to the low interest rate environment. Risks to growth have lessened of late, as a ’Phase One’ U.S.-China trade deal appears to be in place and global growth seems likely to reverse course and accelerate in 2020.”

New-home sales are expected to rise to 750,000, an 11 percent increase that puts them at a 13-year high. Existing-home sales will continue to be held down by lack of supply, rising modestly to 5.6 million, a 4 percent increase. The national median sale price of an existing home is expected to grow to $270,400, an increase of 4.3 percent from 2019.

“In 2020, more home-building activity and consequent growth in supply should tame down home price gains,” said Lawrence Yun, the NAR’s chief economist. “That’s a healthy development for potential home buyers. Southern cities should once again do better than most other markets.”

The 30-year fixed-mortgage rate will remain below 4 percent in the coming year, moving to 3.8 percent by the end of 2020.

“Interest rates will remain low, as long as we have government backing of mortgage-backed securities,” Yun said. “But mortgage rates may increase as inflation kicks in and economic activity markedly picks up.”

The real estate listings website expects inventory to evaporate, making it more challenging for buyers to find a home despite attractive interest rates.

The scarcity of homes on the market will drive down existing-home sales by 1.8 percent to 5.23 million.

“Real estate fundamentals remain entangled in a lattice of continuing demand, tight supply and disciplined financial underwriting,” said George Ratiu, senior economist at Realtor.com. “Accordingly, 2020 will prove to be the most challenging year for buyers, not because of what they can afford but rather what they can find.”

The online real estate brokerage predicts the housing market will be more competitive in 2020 because of low mortgage rates and a lack of homes for sale.

Competition will increase with 1 out of 4 offers facing a bidding war. Increased competition will push price growth 6 percent higher in the first half of the year, but as the year goes on, a more balanced supply and demand will allow price growth to moderate at 3 percent.

Mortgage rates will hover around 3.8 percent and not fall lower than 3.5 percent, even if the economy weakens. If the economy strengthens, rates aren’t likely to go above 4.1 percent.

Hispanic homeowners will gain more wealth from home equity than white Americans. The majority of new homeowners are Hispanic, and home values in Hispanic neighborhoods are increasing faster than in white neighborhoods.

Charleston and Charlotte will lead the nation in home price growth.

The median U.S. home value is expected to end the year up 2.8 percent from the end of 2019. That’s lower than last year’s expected growth of 3.6 percent.

Home sales will continue to climb, albeit slowly.

“We expect a slower market than we’ve become accustomed to the last few years,” said Skylar Olsen, Zillow’s director of economic research. “But don’t mistake this for a buyer-friendly environment. Consumers will continue to absorb available inventory, and the market will remain competitive in much of the country.”

Mortgage rates are expected to remain near relatively low levels in 2020.

“Softening GDP growth and investment, continued global weakness due in part to the U.S.-China trade conflict, and below-target inflation will continue to hold rates in check,” Olsen said.

Builder confidence is higher than it has been in two decades, according to the trade association that measures industry sentiment. The NAHB/Wells Fargo Housing Market Index, a monthly survey that gauges builder perceptions of single-family home sales and sales expectations for the next six months, clocked in at 76 in December, after starting 2019 at 58. It’s at its highest level since June 1999. At its lowest point during the Great Recession, the index plummeted to 8. 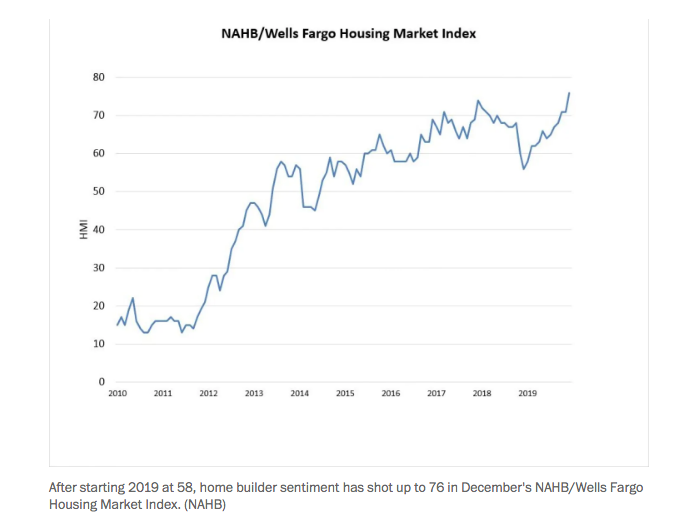 The NAHB expects new-home sales to be around 708,000, a 2.5 percent gain over 2019. Single-family construction, which includes for-sale housing, custom builds and built-for-rent, will increase 4 percent from 2019 to around 920,000 units. That’s still well below the average number of starts before the housing crash.

“The U.S. faces a cumulative housing deficit of about 1 million homes based on population, household formation growth and the need to replace older homes,” Dietz wrote in an email.

In comparing the past six decades, Dietz noted that significant amounts of under-building occurred in the 2010s. When adjusted for population growth, the numbers are even more staggering.

Here are the production numbers as measured in terms of starts per million population (averaged over the decade): 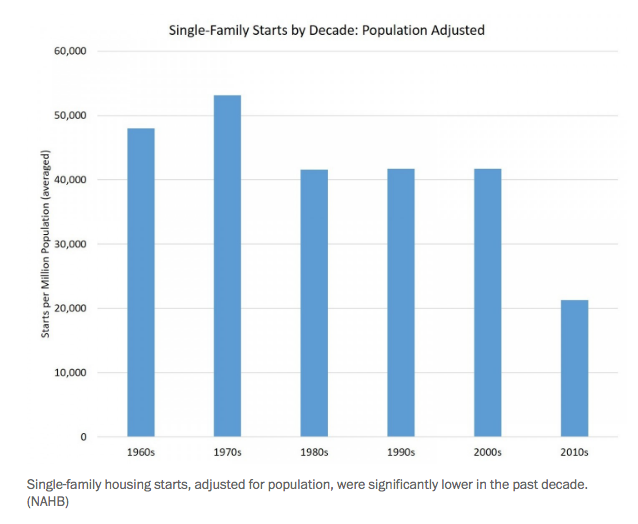 “While we are seeing near-term positive market conditions with a 50-year low for the unemployment rate and increased wage growth, we are still under-building due to supply-side constraints like labor and land availability,” Dietz said. “Higher development costs are hurting affordability and dampening more robust construction growth.”

“Interest rates will, on average, remain lower for longer given the somewhat cloudy economic outlook,” said Mike Fratantoni, the MBA’s chief economist. “These lower rates will in turn support both purchase and refinance origination volume in 2020. Lower-than-expected mortgage rates gave the refinance market a significant boost [in 2019], resulting in it being the strongest year of volume since 2016. Given the capacity constraints in the industry, some of this refinance activity will spill into the first half of next year.”

The financial website has the 30-year mortgage rate holding steady around 4 percent.

“The benchmark 30-year fixed rate mortgage will hopscotch back and forth over the 4 percent mark for much of 2020, remaining low enough to facilitate home-buying and providing ample refinancing opportunities on those trips below 4 percent,” said Greg McBride, Bankrate.com’s chief financial analyst. “Rates will trend higher toward the back half of the year as inflation readings move above 2 percent.”

U.S. homeowners are sitting on $6.2 trillion in untapped home equity, according to real estate data and analytics firm Black Knight. Many of them may consider tapping into that equity to pay for their children’s education or undertake a home improvement project now that interest rates are expected to remain low.

Most home equity lines of credit (HELOCs) are variable-rate loans tied to the prime rate, which follows the Federal Reserve’s Federal Funds rate. The Fed cut its benchmark rate three times in 2019 and indicated that rate increases were unlikely this year.

“Interest rates are unlikely to be an impediment for qualified home equity borrowers in 2020,” McBride said. “Even if mortgage rates were to rise from the sub-4 percent levels of 2019, HELOC rates would largely hold steady if the Federal Reserve isn’t changing interest rates.”

Originally Published on CNBC By Diana Olick Mortgage applications numbers get stronger each week as homebuyers rush back into the ...Read More

Originally Published on CNBC By Diana Olick Rising interest rates did nothing to deter an onslaught of mortgage demand from ...Read More

Originally Published on Realty Biz News by Mike Wheatley The sudden and unexpected shift to remote work for many Americans has put a ...Read More