Recession Fears Are Receding. That Doesn’t Mean They Were Unfounded 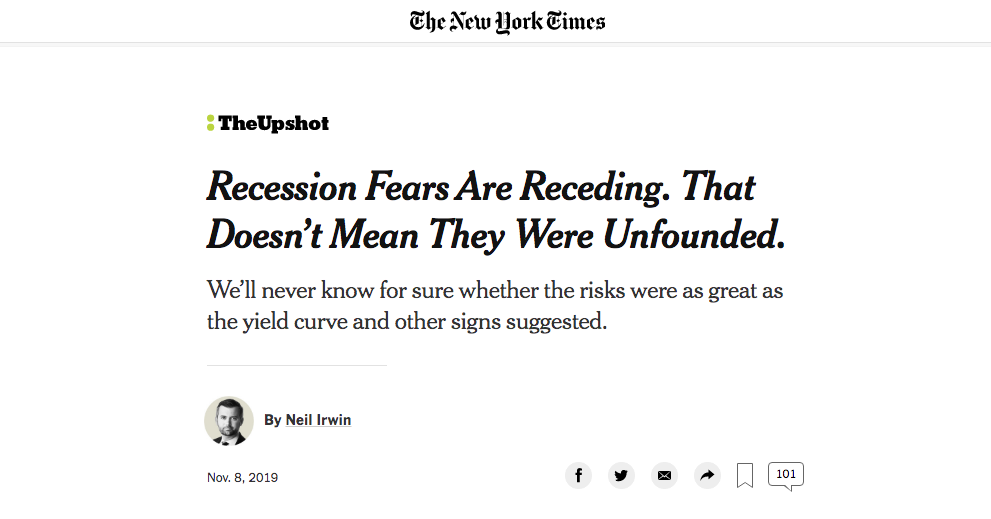 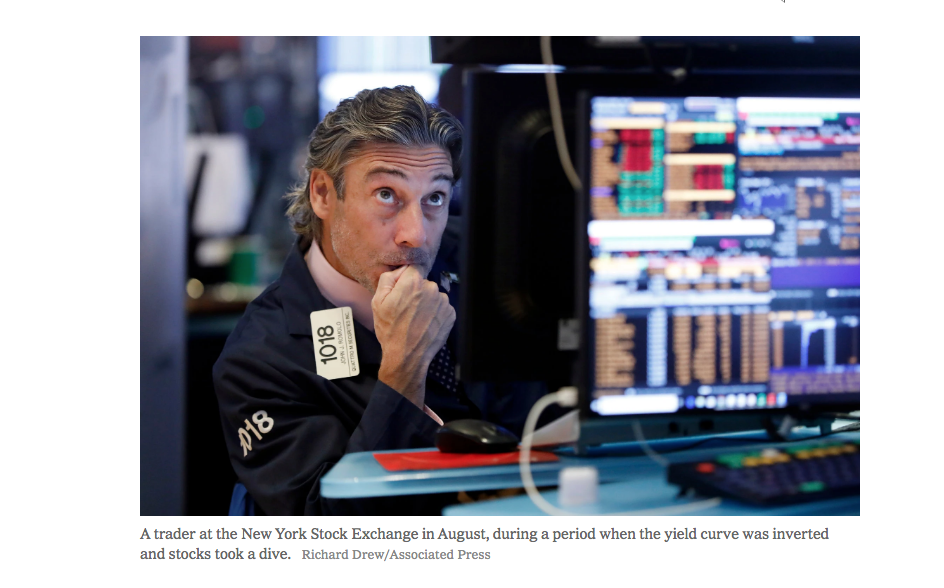 Imagine you are in a car speeding down the road. An obstruction comes into view, and the passengers in the car yell, “Watch out!”

The driver swerves and misses the obstruction, and everything turns out fine.

Were the passengers being alarmist by yelling? Would the driver have averted a crash either way? Was the obstruction big enough to cause damage, or could the car have just driven over it without incident? We’ll never really know. All we know is that things worked out O.K.

The car, in this metaphor, is the United States economy. The drivers are the Federal Reserve and the Trump administration. And the passengers are all the people — especially on Wall Street and in the news media — who were raising recession fears three months ago.

At that time, some unusual swings in the market for United States Treasury bonds stirred a wave of economic pessimism. Three months later, things are looking a great deal better — and the odds of a recession, in the near term at least, appear more remote.

The entire episode has some lessons for understanding the economy, and gives reason for optimism that the expansion, despite being more than a decade old and the longest on record, need not end anytime soon.

The underlying cause of the summer surge in recession fears was a trade war between the United States and China that seemed locked in a hopeless cycle of escalation; a major slump in the European economy; and manufacturing indexes in free fall worldwide.

That made investors so pessimistic about the global economy that they poured money into longer-term securities, pushing their interest rates below short-term rates, known as an inverted yield curve. Because an inverted yield curve has often presaged recessions, this prompted a wave of news coverage that even risked becoming a self-fulfilling prophecy, if businesses and consumers pulled back further.

Three months later, the picture has changed. Longer-term bond yields have risen back to their levels at the start of August: Ten-year Treasury bonds yielded 1.93 percent in Friday morning trading, up from a recent low of 1.46 percent in early September. Longer-term yields are now comfortably above short-term yields, meaning the yield curve is no longer inverted.

And while the manufacturing sector remains in bad shape, the evidence so far points not so much to a free fall as a rough patch. More promising, the troubles in manufacturing have not spread to the services and consumer-focused portions of the economy, which are much larger.

One way of looking at this narrative of the last few months would be to say this proves that everyone was overly jittery, that the news media, Wall Street and the Federal Reserve overreacted to a few inconclusive data points.

That’s not a crazy assertion. Throughout this decade-plus expansion, there have been periodic bursts of pessimistic sentiment, times when a recession seemed to loom, and thus far all of them have proved false. So you could chalk up this episode as one more example, with the lesson being that the American economy is dynamic and robust enough that it will probably keep chugging.

The problem with that narrative is that it omits the circularity involved in economic policy. It was the yield curve inversion and softening of global manufacturing indexes that caught the attention of policymakers, and their moves have helped ease recession fears.

Since midsummer, the Federal Reserve has cut interest rates three times, for a total of 0.75 percent. It was an implicit acknowledgment that interest rate increases in 2018 had pushed rates in the United States beyond what it could handle in light of global deflationary forces.

There were people, both inside and outside the Fed, who argued that these moves were unnecessary in a time of near-full employment, and that they would lead to financial bubbles and other risks down the road. Time will tell whether those warnings are right. And maybe the rate cuts weren’t actually necessary.

But what we do know is that the yield curve is now uninverted. Longer-term yields, while back to their early August levels, are still considerably lower than they were earlier in the year. It’s not that the global economic outlook has improved all that much; it’s just that the Fed has now adjusted United States interest rates to a level that should allow the domestic expansion to continue despite that global slowdown.

Then there is President Trump’s trade policy. It’s clear, both from the timeline of events and comments from the administration, that the recession fears increased the urgency for some form of trade peace with China.

No president wants a recession in an election year, especially not a president who has made boasts about the economy central to his pitch. The basic outlines of the tentative agreement between the world’s two largest economies may have been available all along. China will buy more agricultural products, and the Trump administration will not put in a new round of tariffs that were set to go into effect in December.

There have been mixed signals whether the United States and China will back off from existing tariffs — whether this will amount to de-escalation, or simply to ceasing the escalation. But either way, the tenor of the relationship has improved considerably since August, which is part of why the tenor in markets and surveys of executives is looking better.

As in the economy-as-speeding-car metaphor, we’ll never know for sure whether the risks were as great as the yield curve and some of the more ominous pronouncements from the summer suggested.

What we do know is that the American economy seems to be showing resilience, and it would be better not to find out what happens if the passengers never yell when something gets in the way.

Neil Irwin is a senior economics correspondent for The Upshot. He is the author of “How to Win in a Winner-Take-All-World,” a guide to navigating a career in the modern economy. @Neil_Irwin • Facebook 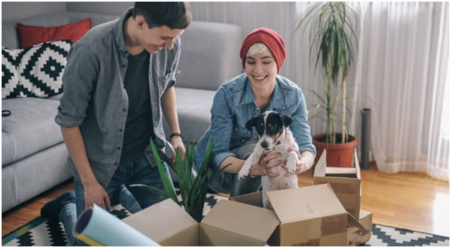 According to an Urban Institute study, homeowners who purchase a house before age 35 are better prepared for retirement at age 60. The good ...Read More

Experts predict what the 2020 housing market will bring

A strong job market and low mortgage rates should sustain the housing market in 2020. The problem will be finding enough homes for buyers....Read More 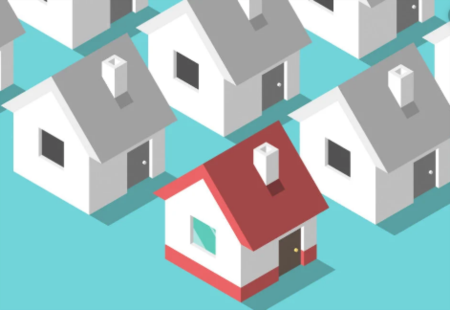 Mortgage rates fall further, as buyers rush into the first open houses of 2020

The average rate on the 30-year fixed mortgage fell to the lowest level since October this week, at 3.69%, according to Mortgage News Daily. That ...Read More