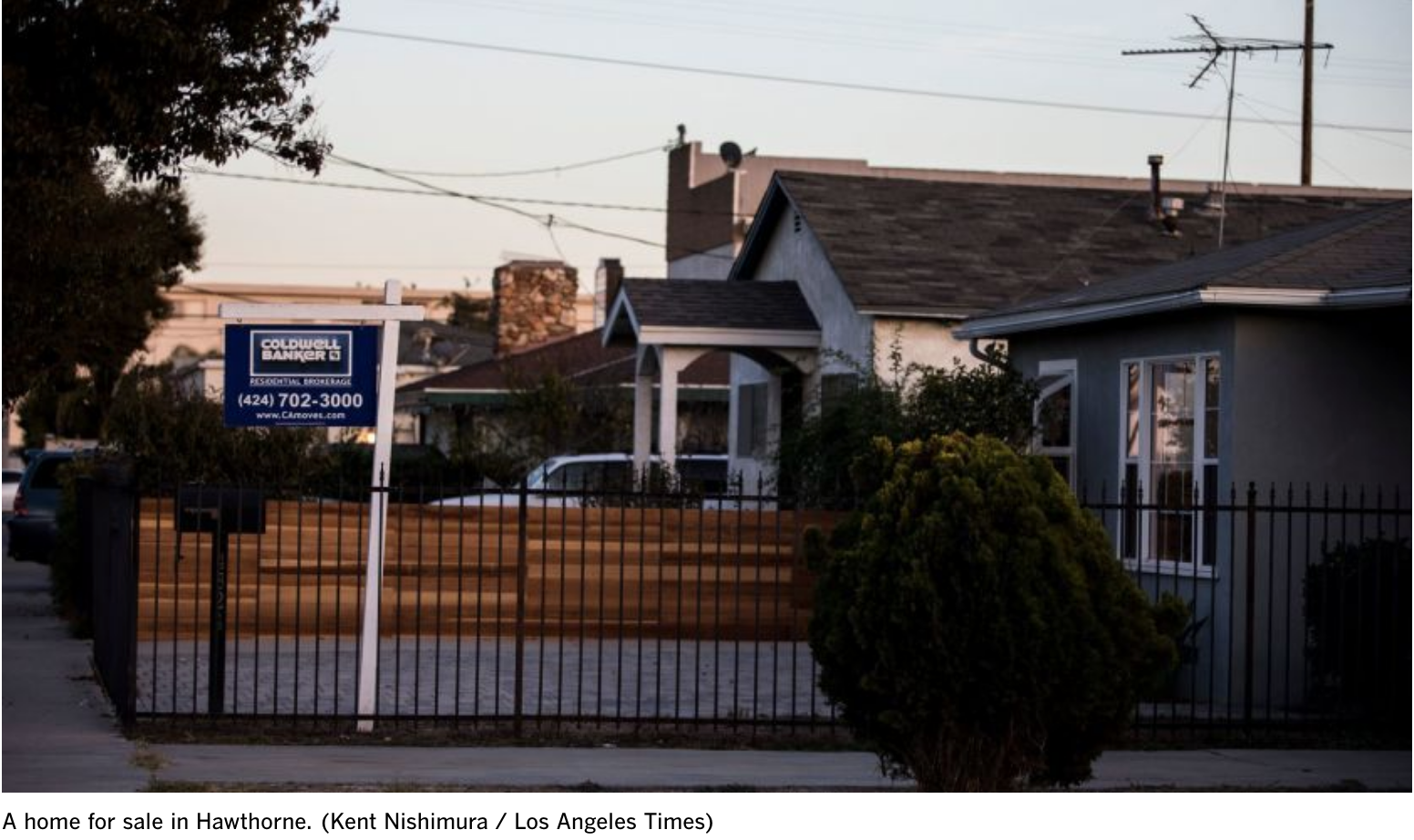 After a sluggish start to 2019, the Southern California housing market is ending the year on an upswing.

The median home price for the six counties rose by 5.6% in November from a year earlier, to an all-time high of $549,000, according to data from DQNews. The percentage increase was also the largest in 15 months.

“The California housing market will likely wrap up 2019 in slightly better shape than previously thought,” Leslie Appleton-Young, chief economist at the California Assn. of Realtors, said in a recent statement.

Indeed, the warming housing market follows a slowdown that economists and real estate agents blamed on the lack of affordable housing after years of sharp price gains.

But as incomes have risen and mortgage rates have dropped, the market has shown signs of turning around.

In October, average hourly earnings for the Los Angeles-Orange County metro region jumped 5% from a year earlier. In the Inland Empire counties of Riverside and San Bernardino, wages rose 4.8%. Statewide, unemployment is the lowest in more than four decades.

While incomes have risen this year, money has gotten cheaper. The average rate on a 30-year fixed mortgage this week was 3.73%, flat from last week but down from 4.62% a year earlier, according to Freddie Mac. The change would save $227 on a monthly mortgage payment for a $549,000 house, assuming a 20% down payment.

Sales have been on the rise in recent months, but price gains were still muted before November and real estate agents said people remained reluctant to bid up housing.

One month’s data should always be read with caution, but November’s numbers could indicate buyer mentality is shifting. Households are probably growing more confident as fears about the national economy have eased, said Christopher Thornberg, founding partner at Beacon Economics.

Also, despite the slowdown, home prices never plunged as some feared. Thornberg said many are probably thinking: “Oh, my god. I better get out there and get that house.”

All Southern California counties shared in the price and sales growth:

Further price gains will disappoint many Southern Californians struggling to purchase a home or who are already locked out of ownership in a region where tent encampments line the street. But Thornberg said prices are rising because enough people can afford the limited number of homes for sale. According to the California Assn. of Realtors, 25% of L.A. County households could afford the median-priced house in the third quarter, compared with 22% a year earlier and a low of 9% during last decade’s bubble.

Not all data providers show such strong price gains. Zillow, for instance, shows prices rising by only 1% in Los Angeles County in November. Partly that reflects different metrics: DQNews uses the median sale price, the point at which half the homes sold for more and half for less. Zillow tries to estimate the median price for all homes in a market, not just those that sold in a given month.

Greater clarity on the direction of the market will come in the spring — the typically busy time to buy a house. If inventory remains tight, that could support stronger price gains.

Zillow data show there were fewer homes for sale in all six Southern California counties in November than a year earlier. The declines ranged from 11.4% in San Bernardino County to 21.4% in San Diego County.